Thursday, April 22, 2021, 6:30 pm (via Zoom)
Saints and Sinners: The Congregational Churches of Hatfield and Adjacent Towns in the Early Days of Settlement

Local historian Peter Thomas has recently completed digitizing and organizing some of Hatfield’s early records*, as well as records from a handful of neighboring towns. This labor of love didn’t stop with digitization, though. At our upcoming live-streaming meeting, hosted on the Zoom platform, Peter will help us understand what’s going on in these church and state records, since even the basic vocabulary of then and now has changed.

Church practices of the time were designed to punish those who strayed from well-established rules – with indiscretions ranging from a woman caught playing cards in a tavern, to a young man who skipped two Sunday services and attended a dance.  Come see how you might measure up to the standards of the time!

To register for the program, please send a note to HHS Program Chair Marion Abrams at: marionabrams@comcast.net

*Hatfield Vital Records (1660-1884) can be viewed on the Town Clerk’s page on the Town of Hatfield website by clicking HERE. 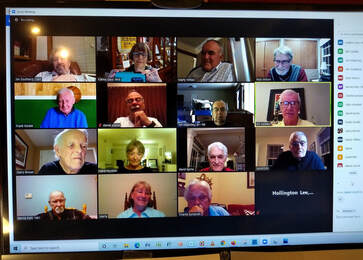 Here's the cast of participants from our reunion call, most of whom were able to join us for the March 18 program.
March 18, 2021. Approximately 75 people tuned in for our first live-streaming program -- a panel discussion with players, managers and cheerleaders from Smith Academy's two basketball teams of 1960 and 1961.

Not only was it fun to reminisce and hear about the two underdog high school teams who won back-to-back Western Mass Championships (and went on to compete in the New England Tournaments at Boston Garden), but it was delightful to witness the camaraderie of participants -- 60 years later. And being a virtual program allowed us to bring them all together, from as far away as Florida, Washington state and Australia!

If you missed it, not to worry, you can watch the recording on our YouTube channel HERE.
In addition, we've launched an accompanying website that tells their stories HERE. 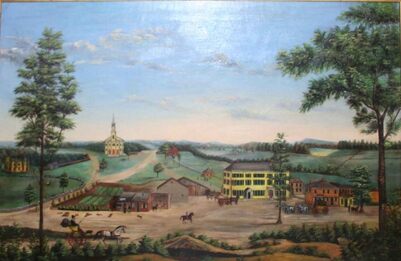 Nov. 23, 2020. The Hatfield Historical Society was one of three history organizations featured in the online event hosted by the Massachusetts Historical Society, titled: "A Treasury of Mass. House Museums & Local History Orgs: Part III: Hidden Gems."  The program was led by William Hosley, principal of Terra Firma Northeast, with an audience of 175.

Hatfield was the first of the three presenters, which also included the Dedham and Framingham Historical Societies.

We shared stories about a dozen prized artifacts from the Town of Hatfield's Collections. You can watch the program HERE. 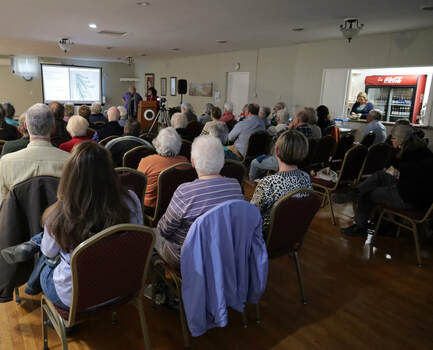 April 17, 2019. A great crowd showed up to hear local historian Dereka Smith, of the Whately Historical Society, and Cher Nicholas, president of the Hatfield Historical Society, share their extensive local research on the agrarian rebellion of 1786 to 1787. As the meeting was held at the Hatfield American Legion Post 344, many attendees enjoyed a glass of beer or wine as Dereka and Cher regaled us with stories of Whately and Hatfield residents involved in Shays' rebellion and as the hosts of multiple meetings.

This program was co-sponsored by the Whately and Hatfield Historical Societies.

Sugaring in New England and Hatfield

Something for everyone at lighting exhibit 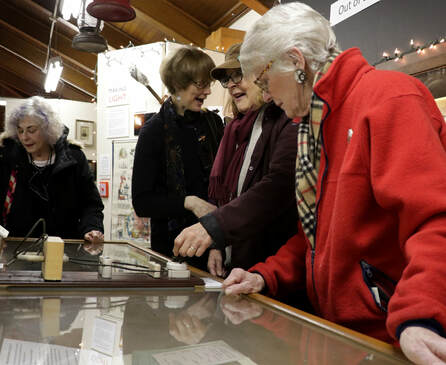 Dec.23, 2018. Approximately 100 people came out to see our eclectic new exhibit: "Out of the Darkness: A History of Illumination in Hatfield," on Luminarium Sunday.

Come see what types of devices local folks would have used prior to candles, and what fuels and fixtures they did use in their homes in between candles and the arrival of electricity. How did YOUR family get its light in the early and mid-20th century? How many electrical outlets in a room did you grow up with?

The exhibit will run till next fall (when we start preparing for NEXT year's Dec. exhibit -- on the history of drinking!) Let us know if you have some items or stories to donate or loan for that exhibit -- or additional stories about lighting.

The Rise and Fall of the Porter McLeod Machine Shop 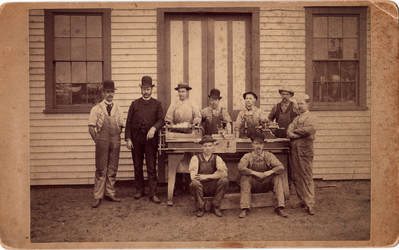 Company Founder Jonathan E. Porter (in suit), poses with workers and the fruit of their labors (a lathe) outside the Porter Machine Works, circa late 1800s.
May 17, 2018. About 40+ visitors listened to UMass Lowell history professor Robert Forrant tell the fascinating story of the rise and fall of the Porter McLeod Machine Tool Co. His richly illustrated presentation was followed by a lively Q&A, with an audience dotted with ancestors of Porter McLeod workers, and one Porter McLeod worker himself.

Come see the accompanying exhibit in the Hatfield Historical Museum, which opened soon after his talk. Not only will you learn who built the company and who worked there, but learn how two collections of records and artifacts were rescued to save these stories.

This project and the accompanying exhibit were funded, in part, by grants from Mass Humanities, Mass SHRAB (the State Historical Records Advisory Board), and the Town of Hatfield's Community Preservation Act, all under the sponsorship of the Hatfield Historical Society.

For those who reserved a copy of Bob Forrant's article in the Summer Issue of The Historical Journal of Massachusetts, come to the Historical Museum to pick your copies (and pay, $8). It looks great! We ordered about a dozen extra copies, so come get one while supplies last..

A perfect day for Fall Festival 2017

Oct. 1, 2017. It was a great day for strolling through the Festival between the Historical Museum and Friends of the Library Book Sale at the front end of Billings Way and the Farm Museum at the back end. This year, a handful of Hatfield farmers joined the festival with their produce wagons and displays full of colorful vegetables. We still had the textile demonstrations in the Farm Museum, cider pressing, food tastings, games, music and more. Check out the pictures below! 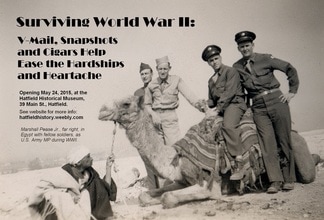 Feb. 25, 2017. Lots of family members of servicemen featured in our World War II exhibit and other veterans came to see the exhibit one last time before it was taken down. We also were honored to have visits from two of our featured WWII participants themselves -- Ted Picard, who drove a landing craft vehicle in Guadalcanal, and now lives at Capawonk, and Marion Root, who worked on clips for the M1 rifle at the Springfield Armory, and now lives on West St. Check out their photos and those of other visitors below.
(Photos by Kathie Gow and Marta Bilodeau.)

Sometime in the future, we hope to get a grant to build a permanent online exhibit that recognizes and honors Hatfield's WWII servicemen and women.

The exhibit, "Surviving World War II: V-Mail, Snapshots and Cigars Help Ease the Hardships and Heartache" ran from May 24, 2015 to Feb. 25, 2017. (click on the underlined title for a larger image of the poster).

Nov. 15, 2012. Hatfield Historical Society members and guests enjoyed a delicious dinner catered by Special Requests, and were then regaled by members of the Easthampton High School Drama Club performing selections from popular musicals. This was one talented group of singers! 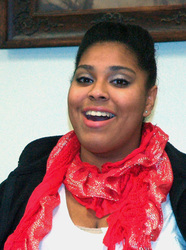 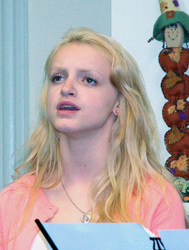 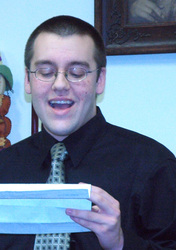 Oct. 7, 2012. The rain held off and attendance was great! Visitors enjoyed fiber arts demos, family activities, antique cars, trucks and tractors, the library book sale, museum open houses, produce from local farmers, good music and good food!  This year we were also treated to a demonstration of how to make sauerkraut by Society member John Pease, and the unveiling of the 6th "Art of Farming" mural on the side of the Farm Museum. The Historical Museum (above the library) also saw lots of traffic, as visitors came to see the two new exhibits -- on Polish immigration in Hatfield and the latest one on the discovery of the buried 17th century village in Hatfield by UMASS archaeologist Randy Daum -- both exhibits open Sat. mornings through Oct. 27.
Click individual photos below or click "Play" when you move your cursor over the big photo. Photos by Hollington Lee. Farm mural photos by John Robert. 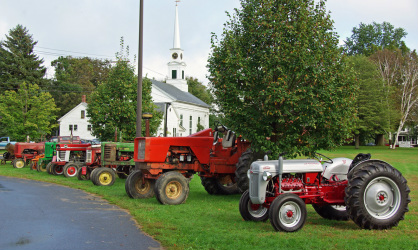 Oct. 2, 2011. Though the rain-soaked day kept most of the antique cars and trucks away, it couldnt' stop the tractors -- or the patrons! After all, what's a little rain to a farmer? (Though it did keep cameras tucked away until the sun came out at the end of the festival). The Boy Scouts still served up their Hatfield fries, the Fire Department still had lines for burgers, and crowds of people packed the Farm Museum, checking out the various textile demonstrations or getting their faces painted. Up Billings Way, visitors  viewed the new Civil War exhibit at the Historical Museum, and walked away with armloads of books from the Friends book sale, local produce and fresh-pressed cider. Rain or shine still works!
Photo by Charlie Kellogg.

The Rise and Fall of American Clipper Ships 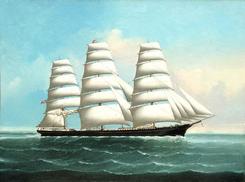 May 19, 2011. Cape Cod-based Jim Coogan presented a talk and slide show on the history of American Clipper ships. He focused on this country's greatest era of maritime achievement -- the narrow window when the Clipper ships dominated the oceans between 1845 and 1860. Coogan is a retired history teacher and author of seven books.

The Wonders Inside the Church Tower 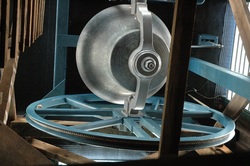 April 14, 2011. Jonathan Bardwell, of Bardwell Woodworking and Remodeling, whose family has been involved in caring for the Hatfield Congregational Church clock for generations, finished a major restoration of the workings and structure in the church tower this past summer. In stories and photos, he explained the workings of the bell and clock and took the audience "with him" as he made his way to the top of the steeple, sharing history he learned from research and his many journeys up and down the church tower. Some of the audience even got to ring the bell! The photo at left is looking down on the 1,800-pound, F# bell and the 7-foot wood wheel that is one of the ways the bell is rung.
x

March 17, 2011. UMASS archeaologist and graduate student Randy Daum spoke to a packed house of fascinated listeners as he led us on his journey of discovery through a group of Hatfield farm fields to find the "Old Farms" settlement of the late 17th century. Daum's field work and research documented the classic "nucleated" village structure (where the homes were all grouped together).

Oct. 3, 2010. A great turnout on a beautiful autumn day. Click individual photos below or click "Play" when you move your cursor over the big photo. Photos by Charlie Kellogg and Kathie Gow.

The Belden Farm: Keeping a way of life alive